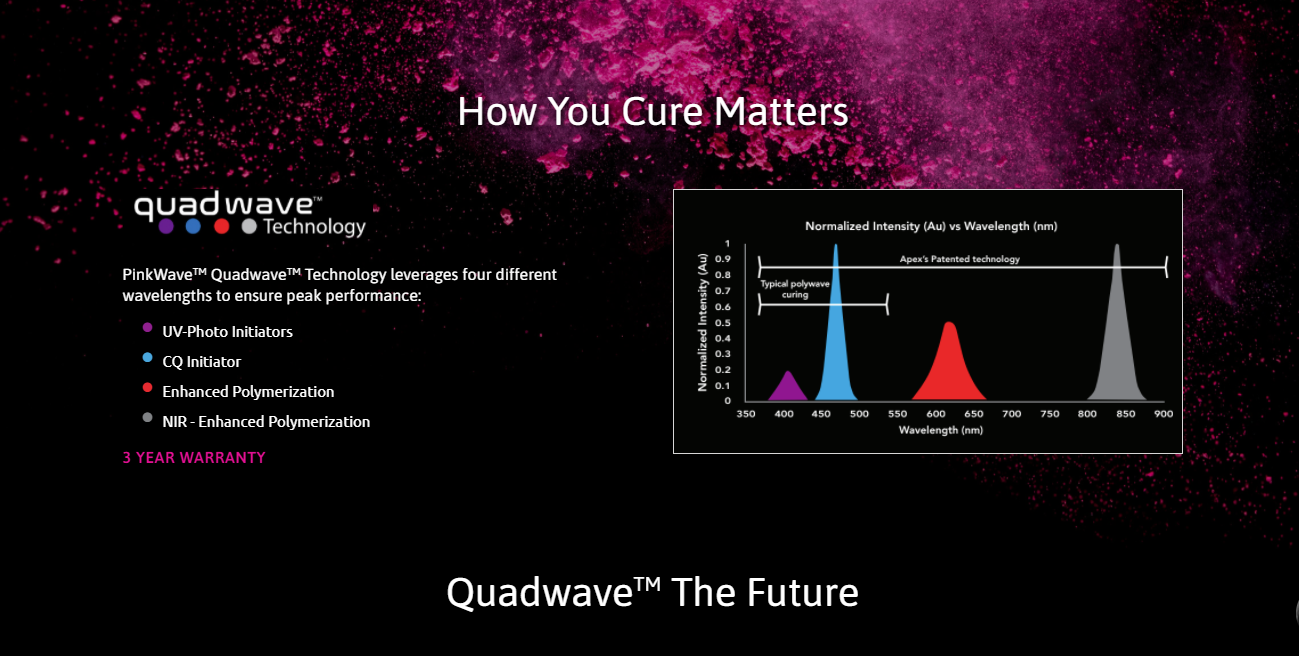 QuadWave™ technology isn’t some new buzzword, and a pink curing light isn’t just a color change. The QuadWave™ technology employs four different wavelengths ranging from 375 – 900 nm that provides a broad spectrum enabling you to cure any composite on the market: UV, Blue, Red, and Near-infrared (NIR), making PinkWave™ the first of its kind decreasing composite shrinkage by up to 37% and increasing hardness by up to 23%.

LED blue light is in nearly every curing light on the market. The blue LEDs, which peak at 473nm, activate the camphorquinone (CQ) molecule. CQ is the most common photoinitiator used in composite materials. CQ absorbs visible light in the 360-510nm wavelength range and has a peak curing efficiency at approximately 470 nm.

Purple in color, UV light is used to activate type-1 photo initiators absorbing in the UV-range, such as TPO and BPO, found in many standard composites.

Near-Infrared (NIR) is an invisible frequency that provides increased polymerization. Unlike UV or blue wavelengths, NIR is not as readily absorbed by the pulp tissue. As a result, PinkWave™ delivers more power, known as irradiance, resulting in increased composite polymerization and microhardness while delivering less heat than standard blue LEDs, providing superior clinical efficacy and safety.

Like NIR, red LEDs provide increased polymerization but do not absorb as readily into the pulp tissue.

In Combination, the four wavelengths have a synergistic effect providing increased microhardness, as shown in Figure 21 (Patent US10588829B2).

PinkWave™ has the added benefit of a built-in transilluminator. This powerful but safe white light illuminates the translucent tooth structure helping with caries detection by revealing cracks, fractures, or other defects in the tooth, specifically in the proximal region.

Altogether, this curing light is nothing like the dental industry has seen before. PinkWave™ and its QuadWave™ technology is truly an innovation that makes us proud.

Fig 21: This figure demonstrates that the addition of photon energy within the disclosed wavelength range enhances the polymerization and degree-of-conversion translating to increased microhardness values post-cure (Patent US10588829B2).

The above figure is a more in-depth explanation of why the interpulpal temperature does not rise as much with PinkWave as it does with standard blue curing lights. You will see the absorption based on wavelength for the tooth (enamel) and the pulp, which contains hemoglobin (Hb), water, and melanin.

In short, you will notice that each absorbs the most energy in the UV and blue wavelengths 400-500nm (making these the hottest), but at the higher wavelengths, such as those of the red and NIR, there is significantly less absorption. Thus, allowing PinkWave to have a lot of power but not get nearly as hot.